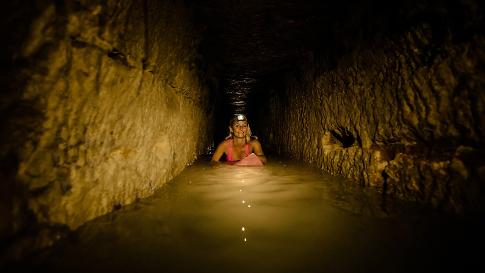 A young woman surfed through the Paris Catacombs with their watery underground passages.

Alison Teal has surfed around an erupting volcano and paddled amidst garbage in the Maldives’ Trash Island, but the 30-year-old Hawaii native recently proved she was indeed the real-life “Indiana Jane” when she brought her pink surfboard nearly 500 feet underground in Paris to surf the world’s largest graveyard.

Teal became the first person to surf the Catacombs of Paris, underground ossuaries in Paris, France which hold the remains of over six million people.

To reach the secret spot, Teal climbed down a drain and crawled through piles of human bones in the middle of the night. Once she and her team of photographers reached the lowest level, she donned her bikini and went for a paddle.

The curiosity of people to still explore the underground catacombs.  They are called Cataphiles for their love and curiousity of the underground which is a central premise in my murder mystery novel “A Cold Death”

The Paris catacombs, which have existed since the 13th century, may be the perfect place to visit for Halloween. But even a daredevil adventurer like Teal got the creeps while performing the surf stunt.

“Skulls lined the walls and it smelled horrid,” she said. “As soon as someone turned a corner, you had no idea where they went.”

Things got hairier when water started streaming through the tunnels. “The water was freezing – some of the coldest I’ve been in and I was wearing just a bikini,” Teal said. 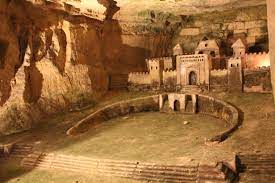 After snapping the stunning shots, Teal and her team were shocked to realize the water level had risen. “After we took the paddling shots we couldn’t go back the way we came,” she said. “We had to go through the water to the other side to get out.”
Check out the original story here.