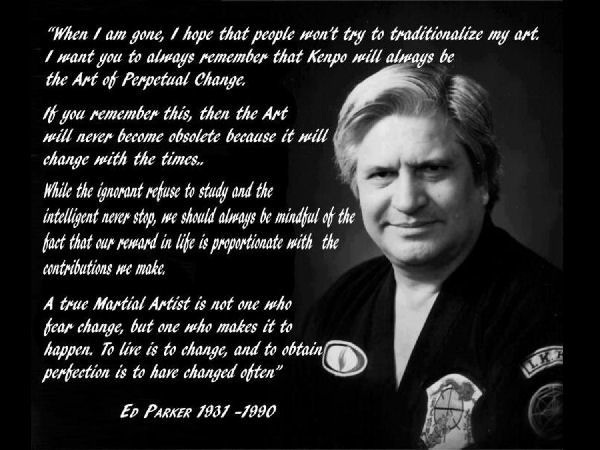 I have studied martial arts for most of my life, recently Kenpo Karate under the Grandmaster Ed Parker system with 8th Degree Bryan Hawkins.  You can see him above teaching the first Yellow Belt technique – “Delayed Sword”.

What is my Martial Arts History?

When I was seven, I started Judo at the local parks and recreation center.  Then Tae Kwon Do in a dojo in the Marina Del Rey area with Mr. Han who was brought in from Korea by Alan Horn.  Horn was a black belt, having learned Tae Kwon Do while serving in the U.S. Air Force in S. Korea.  As a young teenage boy, I was enamored that he would drive up in a Porsche with a different beautiful woman every few weeks (he was in the film industry; another personal aspiration) and then put on a Black Belt to teach.  It was like a teenage boy’s dream in a way.  Horn is now the Chairman of Disney.  But then I went to college, taking more kung fu. I studied Wing Chun in Los Angeles and San Francisco under instructors who studied with legendary Yip Man.

Kenpo and Jeff Speakman who introduced me to Kenpo

In 1987, I was a production assistant working in a production office when a young actor came in with resume in hand. We talked for a few minutes and then I asked about Kenpo on the bottom of his resume.  He explained it for thirty minutes, doing a neutral bow and forward bow in the copy room with me.  I went in to Mr. Parkers West Los Angeles dojo the next day and have been doing Kenpo every since.  Now I teach Kenpo to young people ages 10 to 13 and adults.  This year is my 30th year in Kenpo.

What does one learn from martial arts?

In Kenpo, we study principle related movement – Height, Width, Depth – which are accorded the Principles of Marriage of Gravity, Rotational Torque and Backup Mass.  Certainly, the physical aspects are considerable.  Punching, kicking,spinning, stances, blocking and more.  But it has always been the Principle based mental development that has so intrigued me about Kenpo.  The other martial arts were done according to tradition, particularly Tae Kwon Do and kung fu.  Judo has Principles like Center of Gravity, Balance and more so I gravitated toward this amazing martial art.

But because I have taught Kenpo too, I have seen martial arts from the Teacher perspective.  The great facility of teaching is that you, as the teacher, must discover how a student learns.  Some are visual, some auditory.  Some learn by example, others by physical motion.  Some with intensity, some with a playful humor.

But the martial arts system in Kenpo developed by Grandmaster Ed Parker and taught by Bryan Hawkins has been more than physical conditioning, eye hand coordination and other physical attributes.  Here is a video of a Kenpo test at our dojo.  I am starting around 3:30 (on the left side of the screen) doing Long 6.  The Martial Art system of Kenpo has the aforementioned principles and many, many more.  By naming, defining and then applying them, we develop our Minds.   We adhere to the principles of Mind, Body & Spirit.  And so developing mental based principles – because the mind will always react faster than the body – means that our physical response is enhanced.  And where we develop the mind, we see that martial arts (I initially spelled that ‘marital’ arts which is another article entirely) is a system by which we develop Goal Setting and Virtues.  The Goal setting is inherent in the structure – Forms, techniques and sets must be learned in sequence for belt and rank progress.  The consistency of Goal Setting create a critical human skill.  The second element is a Virtue Building System – hard work, discipline, focus, courtesy, critical thinking and more – become second nature when the Mental directs, informs and interacts with the Physical.

And that creates the Spirit.