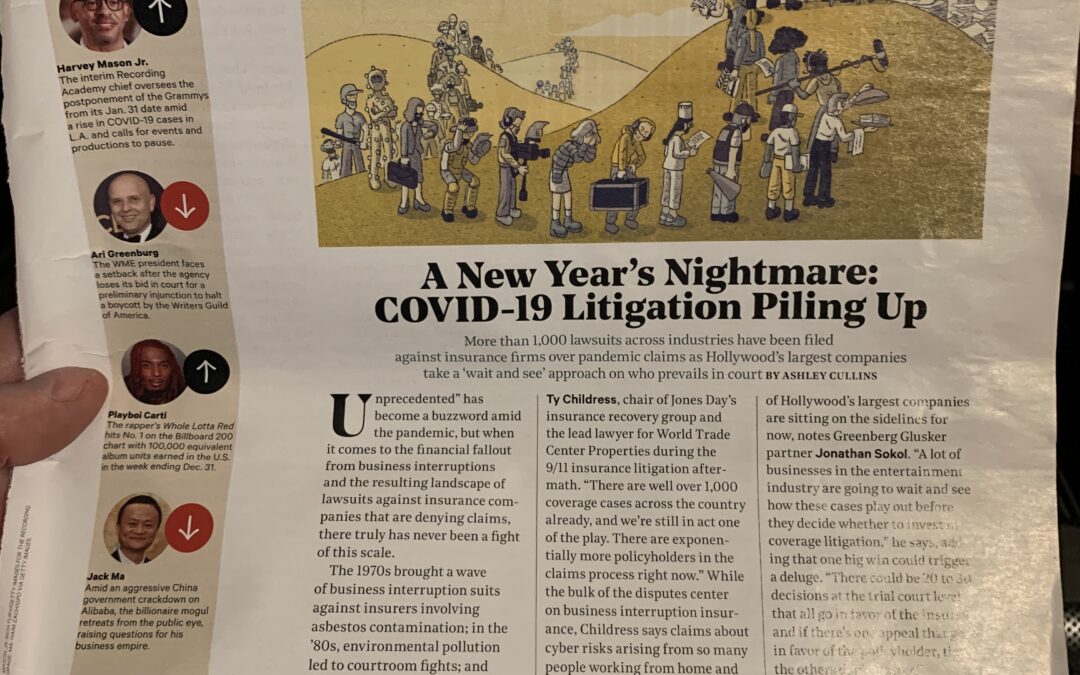 •Production companies commit to a location 90 to 120 days in advance, but a spike in hospitalization rates could lead authorities to pull a film’s permits a month before shooting should start. 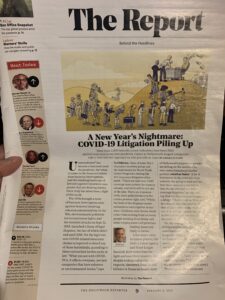 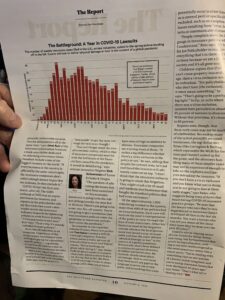 OLDWICK, N.J. //BestWire// – If there were a movie about the level of losses COVID-19 is inflicting on television and film production insurers, it would be an epic drama. Pandemic and communicable disease exclusions were notably absent in policies crafted to protect policyholders from the myriad factors that can interrupt a project.

Allianz Global Corporate & Specialty reserved about $571 million in October for COVID-19-related claims, mostly from its entertainment line as films productions were interrupted and events canceled, said Michael Furtschegger, acting global entertainment head.  “Naturally, we have received numerous COVID-19-related claims notifications,” he said. Film production claims account for about 60% of entertainment losses at Allianz and most claims originated in the United States. The carrier has a larger portfolio in the United States than in Europe, he explained, and there is a notable difference. Pandemic/epidemic exposures were often excluded from film insurance policies in European markets.

“This does not apply to U.S. policies,” Furtschegger said. Or at least it didn’t. Pandemic risks are “now explicitly excluded in all new and renewed film insurance policies globally,” he said, to avoid unintended exposures going forward. Claims could continue in 2021, albeit at a lower level, he added, because some policies written pre-pandemic remain in effect.

But some of the decline will also occur because productions are haltingly resuming, subject to internal and external shutdowns as limits on gathering, curfews and travel restrictions ebb and flow globally. Film insurance claims generally stem from an act of civil authority that prevents an event or production from proceeding as scheduled, explained Furtschegger. “We cover production expenses during disruption, including shutting down the film set, hold costs and the cost of ramping production up again.

“A typical $50 million picture runs at about $250,000 in production fees per day. ”Where production has resumed during the pandemic, Allianz risk consultants are helping set safety and hygiene standards. For example, Furtschegger said, crews and cast may be quarantined at specific accommodations for the duration, everyone is subject to regular temperatures checks and COVID-19 testing, costumes are steam cleaned each day and sets are sanitized as much as possible.  It’s costly and still uncertain. Less filming is taking place, and insurance demand and premium reflect that, said Furtschegger.

Some productions that resumed, such as “The Batman,” paused again when a production member tested positive for COVID-19.  The pressure is high not just for insurers. In mid-December actor and producer Tom Cruise caused a stir on the set of a “Mission Impossible” movie in the United Kingdom when he spotted two crew members violating social distancing rules at a computer.  In an audio tape release by The Sun, the actor angrily calls his production “the gold standard … They’re back there in Hollywood making movies right now because of us … I’m on the phone with every … studio at night — insurance companies, producers,” Cruise said.

Broker Arthur J. Gallagher has offices in every English-speaking major media hub globally , from Los Angeles to Sydney, and distributes products across the production spectrum, said Kingman.  It offers services for television and small documentary films through $500 million productions and has witnessed a sea-change in an industry that previously enjoyed specialty products unlike any other, he said, including broader allowances for business interruption coverage.

Policies may have carried sublimits for perils that endangered cast and crew or property, but production policies were among the few in the insurance industry that didn’t require physical damage to trigger a claim. And some policies in force provided a separate tail for each production. Large media companies in particular favor policies that can remain in effect up to 18 months after the completion, not the start, of principal photography, Kingman added.

Expansive coverage has come at a substantial cost. “Rates are 10% to 12% of some (production) budgets. On a $10 million movie it’s about $1 million — that’s a big premium,” said Kingman.  The investment has paid off for policyholders since March. Civil authority, cast and imminent peril policies have bled claims.

“What caught them off-guard was the systemic risk,” the ability of a single event to potentially bring one or more industries to its knees.  “There’s a lot of aggregation of limits,” he said. “A lot of reinstatements to limits, which give executives at insurance companies a lot of concern. We’re not done yet.”

Carriers may have known the risk of pandemic existed, Kingman said, but downplayed it in film and TV production lines, charging, if anything, a nominal rate. “They didn’t think it would happen on their watch, or they thought it would be a lot less severe.”  Now COVID-19 is “devastating insurance and reinsurance in film and TV” in waves, he said, starting with complete civil authority losses as countries shut down to reduce the spread of the virus.

Production companies commit to a location 90 to 120 days in advance, but a spike in hospitalization rates could lead authorities to pull a film’s permits a month before shooting should start.   “They spend millions of dollars setting up in that location and can’t afford to change without being reimbursed,” Kingman said.

Los Angeles-based Venable LLP commercial litigation group partner Sarah Cronin said larger studios will move forward by self-insuring $1 million or more of pandemic risk, but smaller companies “might not have that kind of flexibility.”  That has repercussions. “Insurance is tied to financing and completion bonds to back it up. A lot of smaller productions are not being made” because the people financing projects need assurances that producers can weather a temporary shutdown.  COVID touched every aspect of production insurance, she said, from specific lines to errors and omissions and commercial general liability.  So much money has been lost that litigation has followed, said Cronin. “It’s at the very, very beginning. I would say it will take two years, optimistically, to resolve.”

While insurers and insureds grapple with tough issues sparked by the pandemic, she agreed productions are moving forward. “The industry will adapt. People are being creative, trying to find workarounds, and the industry is trying to partner with policyholders so no one is losing their shirt.”

Kingman said insurers “never want to be on the wrong side of a pandemic again” and said businesses, banks and other stakeholders will need to recognize pandemic as a systemic risk.  Some specialty coverage offered through managing general underwriters, private pooling groups or self-insurance could reduce the epidemic/pandemic insurance void. That’s expensive at best, a security risk at worst, he said, advocating for a program modeled on the Terrorism Risk Insurance Act for pandemic coverage across the commercial lines spectrum. The federal government is the “only organization big enough to take on a risk that’s going to be uninsurable in the near future,” Kingman said.  Specialty insurer Markel International underwrites film and media insurance on the company’s and syndicate platforms. Anchored by advertising agents’, commercial producers’ and film production products, the carrier also offers employers’ and public liability for companies involved in film shoots.  Mid-year, it decided to move its entertainment portfolio to its professional and financial risks portfolio, which already included media errors and omissions (Best’s News, June 19, 2020).

Bob Gilbert has worked in the entertainment insurance niche for decades — the past seven at Markel, where he is an underwriting director, based in Los Angeles.  As an excess writer, Gilbert said he and his team rely on the expertise and follow the direction of the entertainment primary writers like Allianz and Chubb. “You’re only as good as the primary carrier if you want to write the account,” he said.

Even the highly experienced field of film and television production writers were surprised by the breadth of the impact of the pandemic.  Primary carriers reduced limits, which opened the door wider for Markel to partner with them. Submissions rose markedly over the past seven to eight months, Gilbert said, and he expects the trend to hold in 2021. “We’re positioned to offer limits at a time when other companies weren’t.”  He pointed out carriers in film and television are keenly aware of other types of catastrophic risk. For instance, he said they steer production companies away from the Caribbean and Florida the height of the Atlantic Hurricane Season.  Other times they’ve tightened underwriting and increased risk management. He’s seeing more of the same during the pandemic and thinks some COVID-19 containment measures may linger to reduce the likelihood that other viruses could spread among cast or crew and temporarily halt production. “Like every other industry, we have to think out of the box.”

Gilbert thinks primary capacity will return when production ramps back up, as long as conditions align with the risk. Some new writers are dipping their toe in the space. “They always do when the market is tightening,” he noted.