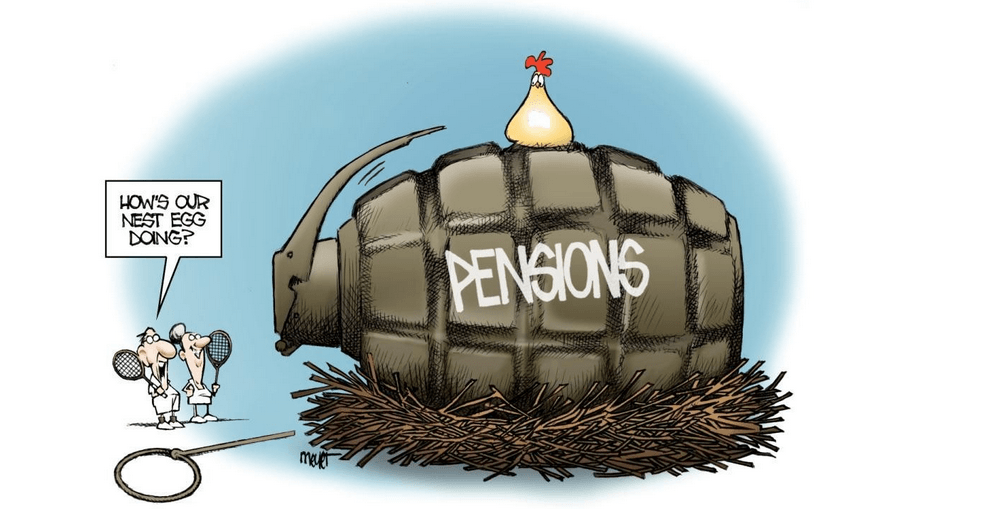 The pension crisis in California grows precipitously in its two major pension funds.  CALSTRS and CALPERS. While the fund managers claim a growth rate of 7.5%, they only achieved 0.61% last fiscal year (June 2016).  Furthermore, these two major funds are sorely underfunded, meaning that they have two bad attributes.  Underfunded and poor performance.

A Stanford study shows that the pensions are underfunded by well over a trillion dollars.  $1.2 Trillion.

If a Stanford Institute for Economic Policy Research’s estimate is accurate, public pension debt in California is even worse than feared. Preliminary calculations from a forthcoming SIEPR study peg the unfunded retirement tab for state and local government employees at more than $1.2 trillion, according to Insolvent Film, a website based on a documentary on government financial stability.

The $1.2 trillion-plus deficit includes approximately $950 billion in unfunded pension liabilities and about $300 billion in other post-employment benefits (primarily retiree health care). The total translates to roughly $30,650 for every man, woman and child in the state – about $123,000 for a family of four.

The figures are substantially higher than official government estimates. The unfunded liability for the California Public Employees’ Retirement System, for example, would be greater than $300 billion using this method – more than three times the official figure.

The difference, as Stanford public policy professor Joe Nation explained to Insolvent Film, is that public pension systems base their financial estimates on unrealistic assumptions about investment rates of return. CalPERS expects to earn 7.5 percent a year, for example.

Apparently the pension funds have Two Sets of Books:

When one of the tiniest pension funds imaginable — for Citrus Pest Control District No. 2, serving just six people in California — decided last year to convert itself to a 401(k) plan, it seemed like a no-brainer.

After all, the little fund held far more money than it needed, according to its official numbers from California’s renowned public pension system, Calpers.

Except it really didn’t.

In fact, it was significantly underfunded. Suddenly Calpers began demanding a payment of more than half a million dollars.

“My board was somewhat shocked,” said Larry Houser, the general manager of the pest control district, whose workers tame the bugs and blights that threaten their corner of California citrus country. It is just a few miles down the road from Joshua Tree National Park.

In an ominous sign to cover their imcompetence, state officials are shifting other financial burdens to the counties and cities:

Some new analysis of the Governor’s plan to shift costs for In-Home Supportive Services (IHSS) back to Counties shows the impact is larger and grows faster than originally thought. Counties stand to lose $625 million in the first fiscal year, and the total cumulative cost is more than $7 billion by the 2022-23 fiscal year. Tables showing the increased costs are available at this link.

The state, hoping to reduce costs by coordinating IHSS with other health care services, took over more financial responsibility for IHSS in 2012. In doing so, it capped the amount Counties would have to pay. In the ensuing years, costs for the program have ballooned due to increases in the minimum wage, paid sick leave, and overtime pay for IHSS workers. The Governor is now proposing to shift all of these costs back to counties, but the dollar amounts of the cost shift would be devastating to counties both large and small.

For example, Los Angeles pegs their raw cost increase at $220 million and Yolo County pegs theirs at $4 million.