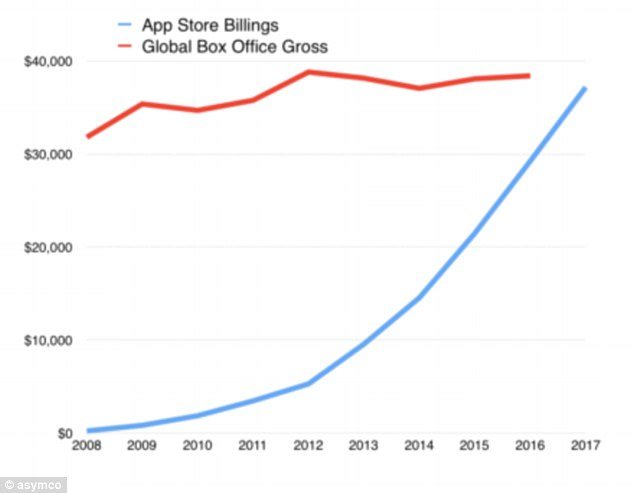 Vast change in the film industry is an understatement.   For the first time ever,  Apple’s App Store is set to overtake Hollywood in global revenue.    According to this Daily Mail article,  people will “spend $100 million a day on apps by the end of 2018.”

So one has to decide what the “Film Industry” actually means these days.   As I’ve told my kids who’ve expressed interest in the entertainment industry:  “You don’t want to be in the film industry. You want to be in the media industry.”

A couple of parameters to think and segment about the Media Industry:   Is the Customer in a Mass Audience (theater, concert, Facebook Live Event, etc., ) or participating singly (Virtual Reality, Augmented Reality, Gamer)?   Is the engagement passive (theatrical films, TV, Streaming) or active (gaming, VR)?

And when you throw a Smartphone into the mix, you get vastly different dynamics in your access points and economics.

Re-creating these types of segments, we can actually start to think in what direction is both growth and opportunity.    In the article on the App Store, I noted this fascinating tidbit.  Well, not really a tidbit if you think about it.   My highlights (bold and underlined) are intentional.

By the end of 2018, Apple Apps will surpass theatrical revenues.

Asymco also said that the economic impact of the app store goes far beyond app revenue. ‘There are not only free apps but also many apps which are front-ends to complex services which are monetized in various indirect ways,’ Dediu wrote.

‘Facebook, Twitter, Linkedin, Tencent, YouTube, Pandora, Netflix, Google, Baidu, Instagram, Amazon, eBay, JD.com, Alibaba, Expedia, Tripadvisor, Salesforce, Uber, AirBnB and hundreds of others are all ‘free’ apps enabling hundreds of billions of dollars of interaction none of which are captured in the App Store revenue data.

‘By weight of users and their propensity to engage, iOS enables about 50% to 60% of mobile economic activity.‘

Just how much economic activity are we talking about?

Based on assumptions of revenue rates for mobile services and iOS share of engagement, Deidu said his estimate of the economic activity on iOS for 2017 is about $180 billion, and including hardware sales, the iOS economy cleared about $380 billion in revenues over the year.

I have read a considerable amount of conjecture that Apple would consider buying Netflix.   While I think that might have been possible two years ago or three, I think Netflix is on its own free-for-all spending spree and wants to grows its own power in the industry.

But Apple clearly wants to dominate the Entertainment Industry and can with its the enormous reach through its App Store. Apple recently agreed to lease a warehouse in the esteemed media center of Culver City that is 128,000 square feet plus a second building in Culver City of 85,000 square feet.  At 213,000 square feet of usable space, you are putting in a lot of offices and staff for media.

Its venerable iTunes platform is amongst the most used platforms for online streaming.   For producers, iTunes takes a 30% cut of the cut as compared to Amazon’s 50% cut for producers.  Most film industry distributors would take about 30% of the gross which means that iTunes is in line with industry standards.  Amazon is a bit gluttonous on that front – but then again you get Amazon traffic for any and all related niches.  Somebody could be buying a tennis racket on Amazon and trip over your Roger Federer Biography film just a link away.

Steve Jobs was a challenging personality by all account.  Nobody wanted to see “Angry Steve” – and I know three people who were on the receiving end.  A half hour of screaming is a major challenge in a work environment.   Still, one cannot deny his genius for invention, marketing and design.  Tim Cook is no Steve Jobs, by a long shot.   Jobs changed design, the way we engage in phones with the iPhone, the post-production creation process in editing with Final Cut Pro and many other areas.  With Pixar, he changed animation.

Apple is a company with enormous pride and a heritage toward invention and market dominance.    And it’s paying a tax of $38 Billion to bring in all its cash.  That’s a lot of money to play with to dominate, expand and re-engineer the market to their liking.

That’s the Ghost of Steve Jobs will do.