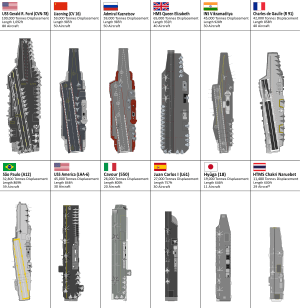 Aircraft Carriers have become the primary method by which the United States projects power.  You can  – and numerous American Presidents have – station an aircraft carrier off a country to show determination on a particular issues.  That issue could be Freedom of the Seas, a hostage situation, and more.  In the case of the Indian Ocean tsunami, the American aircraft carrier provided disaster relief.

Few countries operate real carriers – Britain and France come to mind.  The other carrier operations like Russia, Japan and China tend to be jump jets, helicopter support, etc.,   The technology is extremely complicated.

Missiles are the primary adversary of a carrier.  Launch a thousand missiles at a carrier and a dozen carrier killing projectiles will heavily damage or destroy such a huge target.

The Ford, hit with delays and technical glitches, is expected to become operational in 2020. One question about its formal readiness, however, rests on whether the Navy will perform “full-ship shock trials,” a test in which the service detonates explosives nearby to demonstrate its fitness. Some in Congress—which has mandated a carrier fleet no smaller than 11—want to move the Ford into duty more quickly to reduce strain on the rest of the carrier fleet.

These massive mobile airports, which can cart as many as 90 aircraft simultaneously, are designed to project U.S. military and diplomatic power around the world. Earlier this month, for example, the Navy posted two carriers, the USS Carl Vinson and the USS Ronald Reagan, and their strike groups in the Sea of Japan for joint exercises with Japan’s Maritime Self-Defense Force as a precautionary signal to North Korean aggression.