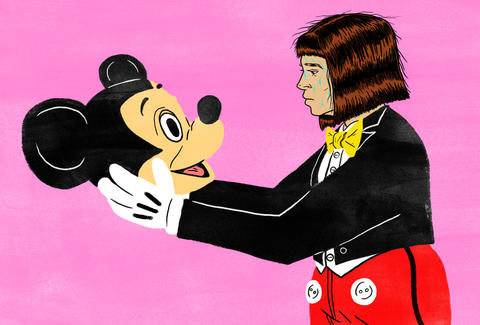 Disney (DIS) stock has been cycling up and down in this volatile climate, replete with the Coronavirus, a frozen economy, a quarantined populace and considerable uncertainty for Social Public behavior for the vast majority of American consumers – the absolute vast demographic for Disney’s economic well-being.

What Caught my Eye?  This article in NYTimes:  “

Since few people really enjoy the math, I’m saving most of these insightful screen grabs at the end. However, one can condense the Math to one statement: When you have no customers, you won’t make any money. Indeed, on numerous websites, the general consensus for the Q1-2020 (Quarter 1 2020) is 50% less as compared to last year 2019.

For Q2-2020, the Earnings Per Share (EPS) is far, far worse. One low prediction is -0.41 EPS. Yes, that’s a negative. The consensus is 0.03. Suffice to say, this disastrous revenue decline – actually more like Mr. Revenue took a jump off the famed Disneyland Matterhorn is a better comparison. The good news is that Mr. Revenue won’t hit any attendees upon landing – the park is shut down.

The Contextual Environment is where Disney finds itself not even in relation to competition. In its field, Disney generally stands head and shoulders above almost every entertainment company. Diversified with near unanimous name recognition for its many franchise properties, amusement parks and more.

However, Disney had not reckoned with a worldwide pandemic and a vast shift in medically required social behavior. Nobody really had. Even smart folks like Bob Iger and Christine McCarthy probably didn’t foresee nor plan for this scenario, especially happening so quickly and with such economic devastation to their primary source of income – the parks – nor the American economy.

In this case, we have two areas of concern. The actual business operations of Disney. And their Customers – Joe Public.

In addition, the stock market threw a whammy into the mix with a major ‘short squeeze’ this week, providing the illusion of a stock market rally to institutions, short sellers with a frenzy of the ‘best week’ of the DOW since 1938 according to Jim Cramer. But with 15 million unemployment filings. And an economy and consumer that lives on borrowing, borrowing, borrrowing.

More than chickens are coming home to roost. The entire henhouse just landed more than Dorothy in the “Wizard of Oz”.

Disney is an individual Customer-centric business. Period. Its financial model is built upon an customer exchange on a grand scale while it touts its globally recognized brand.

Customers in person will attend its parks, buy its merchandise or attend an event to get the glorious “Disney” experience in its numerous wonderlands. Customers at home will subscribe to Disney’s vast array of programming through Disney+ or its plethora of available channels.

Disney has numerous resorts and parks around the world – its world famous original Disneyland in Anaheim California. Florida has Disney World and then there’s Tokyo, Paris, Hong Kong and China. They also include Hollywood Studios, Epcot, Animal Kingdom and California Adventure.

Amusement parks, by definition, need physical visitors which is out of the question right now.

Disney theme parks have been shuttered since March 15h. The company, to its credit, committed to paying employee salaries through April 18th. A generous payment for a month – but without any incoming revenue.

The American Public has seriously changed its behavior.   Most people now realize that jamming yourself next to other people in a line, a ride or anywhere is dangerous and will be for some indeterminate period of time.  How long?  Who knows at this point.

Social Distancing may stay with us until 2022 according to one Harvard Researcher.  https://nypost.com/2020/04/14/harvard-researchers-say-coronavirus-social-distancing-may-be-until-2022/

Social Distance is impossible in these parks. Riders are crammed next to each other both for the sake of volumen (more people per ride) and effect (the person screaming or laughing next to you makes for a better ride. Even today, while various states are discussing efforts to open up their economies to avoid economic collapse and social unrest, the social distancing measures will likely stay in place.

The Next Coronavirus Wave: December?  While the pandemic has an unpredictable nature and the media may either hype or exaggerate its worst effects in their pursuit of clickbait money, some countries are experiencing ‘a second wave’ of infections.

Even if Disney were to get the Federal or State all clear to resume its amusement park activities, then their liability could be enormous for enforcing Face Mask usage, Social Distancing rules and even break up more conflicts between perceived slights in a tension filled environment. In short, the scenario becomes a Liability Litigator’s dream job – to sue the Happiest Place on Earth.

In South Korea, they were reporting that even ‘cured’ patients get infected again. If this is a consistent corona characteristic, then an effective pandemic strategy will come and go with hotspots emerging now and again. https://www.bloomberg.com/news/articles/2020-04-09/coronavirus-may-reactivate-in-cured-patients-korean-cdc-says

Suffice to say, these ‘waves’ and the media news reports about emerging pockets or trends of Coronavirus will make the public very leery of crowds. Not good for Disney.

Disney is a company that creates, controls, licenses and distributes content. The recent Disney+ channel was quite a rousing success with 28 million subscribers (source: Feb 2020 The Verage https://www.theverge.com/2020/2/4/21122106/disney-plus-subscriber-numbers-mandalorian-hulu-espn-q1-earnings )

Disney did make an entrance into the cage fight of streaming services to see its revenues climb from $0.9 billion to $4 billion. But these earnings were already built into its EPS in Q4 2019.

Now we are talking the first three Quarters of 2020 which will prove far more dire, especially given the public’s avoidance of crowds inherently in conflict with Disney’s business model.

Disney owns Marvel, Lucasfilm (Star Wars) as well as a massive list (fully or partially owned) of well-known channels like A&E, The History Channel, Lifetime. You really need a map for their vast and related ownership in these entities. And here it is:

Disney is a franchise producing and licensing behemoth in just these areas alone:

Disney-owned companies have characters and brands that are spread throughout mass media. Here’s just a sampling of a few of them:

Oh, yes, and it just bought 20th Century Fox too.

Content Creation = Production which is the process of gathering 100 to 300 technicians and craftspeople for months on a job in various locations (not just the studio). These 300 crew members interface with thousands of vendors, support groups, creatives and more. And they are also natural born networkers too – they have to keep hustling for jobs and contacts. It’s in their blood.

That’s 300 people together, plus vendors and other contacts like payroll, etc.

Disney is a labor intensive company. The content creation timeline means that the Creatives – discussing scripts, ideas, etc., – can do Chinese hacked Zoom or BlueJeans for virtual meetings.

How are they going to practice social distancing.?

Not to mention that film production doesn’t turn on a dime. An Indie filmmaker might crank up a film (once they found the money) in 6 weeks or so. Not these studios films. They take 6 months to a few years to prepare with design, approvals, scouting, Above the Line Talent (producer-director-writer-actors) dropping in and out more than a visit to the local bar.

Disney is a company that requires a lot of manpower.  According to this article, Disney will furlough – meaning discharged with out further pay – about 43,000 workers on April 19th.

According to the article above, Disney has 223,000 Employees with approximately 75% of these employees working at their Amusement Parks. These employees are usually paid above minimum wage – but not much.

You can also see that Vice Media (partially owned by Disney) did YouTube expose on Disney employees.

What does this mean?

First, the employees are low paid employees who are actively looking for other jobs. This means that many employees will have to be replaced. This replacement means interruptions to operations, more time and more money toward smoothing operations.

Third, some employees have been thinking more like entrepreneurs. Or perhaps their job was a temporary fit on their way to bigger and better things. In any case, this period of quarantine has gotten them thinking bigger and better to find opportunity. Difficult and serious times tends to winnow away the trivial and focus on putting food on the table with a steadier and more isolated line of work.

Why hundreds of Disney workers live in their cars. https://www.theobserver.ca/opinion/columnists/why-hundreds-of-disney-workers-live-in-their-cars

Disney Workers have been agitating for years with labor, pay and health care issues. In one instance, a Disney heiress claims to have gone undercover to see for herself about their conditions and more. “Every single one of these people I talked to were saying, ‘I don’t know how I can maintain this face of joy and warmth when I have to go home and forage for food in other people’s garbage,” said Disney heiress Abigail Disney. https://www.commondreams.org/news/2019/07/16/disney-heiress-who-went-undercover-disneyland-livid-conditions-and-pay

So without the coronavirus danger, worker unhappiness was prevalent and growing in California which has the highest poverty rate of any state.

This article was written on Dec 11, 2019 by thedailybeast.com. https://www.thedailybeast.com/disney-sued-by-labor-union-for-failing-to-pay-living-wage-employees-have-to-live-in-their-cars ;

“A lot of [workers] have to live in their cars, or on people’s couches, because they can’t afford the rent on that wage in the City of Anaheim,” said Kathleen Grace, a plaintiff in the case and a Starbucks barista employed by Sodexo, which Disney contracts to operate its backstage food and beverage services. “It’s really sad to see. A lot of times, they’re choosing to feed their families or put gas in their car to come to work.”

The City of Anaheim responded to the Disney workers concerns with Measure L which was passed in November 2018. This measure “requires resort employers that received tax rebates from the city to pay their employees a $15 living wage. The new wage was supposed to go into effect Jan. 1, 2019, and increase by one dollar each year until Jan. 1, 2022. By 2023, the code states, the wage increases would change to reflect rising costs of living. The ballot measure was backed by the Coalition of Resort Labor Unions, a group of 11 local unions representing 17,000 workers, or more than half of Disney employees.”

The scenario demonstrates that while Disney can make record earnings in 2019, it cannot pay their employees. One’s focus can be that employees or their unions say that they cannot earn a ‘living wage’ but also that they will need more pay for greater risk (public interaction) and probably great health care coverage for this increased risk. Very reasonable point on the employees part – but detracting from the Disney bottom line.

Disney, probably the most recognizable name in world entertainment, cannot work with Social Distance. As a result, Disney’s quarterly Earnings-Per-Share Estimates in the next year are plummeting. Various analysts note that Disney’s fiscal year end (3rd Quarter 2020) will end significantly lower, possibly in the $3-4 range. Last year, Disney earned a high of $8.19 per share for the fiscal year.

And what won’t it get better for Disney over the next year?

Americans have been put through a difficult period of time with the Coronavirus with 200,000+ infections and 20,000 deaths. People are wary of catching this disease. Some people accord it the same lethality of the seasonal common flu. Others believe that the virus can have a major impact on hospitals, ICU beds, etc., Certainly, the media has done its share of informative scare-mongering.

But what has changed is every day human behavior. And that, fellow Mousketeers, is the force shaking Disney’s money tree.

Note: More EPS Est in image to the left.

According to Seeking Alpha, YoY Growth is down -46.61% for Sept 2020 which ends their fiscal years.

Technical Side: (not exact figures; It’s a Sunday and I’m burned out.)

Resistance at a little over $100 which has been tested five times.

I would like to get more insight into its potential PE Ratio used in relation to an estimated Sept 2020 (end of their fiscal year) based on earnings of 3.09. It could go to $4.00.

I think that Disney is a prestige stock, diversified and robust in general. But in the short term with the Coronavirus Effect (e.g. social distancing, crash in discretionary income, merchandise sales, etc.,) that there will be be a serious decline in its stock until next year.