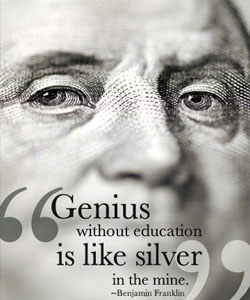 Benjamin Franklin, “The First American,” would have loved the Internet. He was, first and foremost, a printer, author, and publisher. He established the Pennsylvania Chronicle firing up the Colonies against British tyranny. He made his fortune with “Poor Richard’s Almanack” and the Pennsylvania Gazette. “Almanack” sold 10,000 copies a year – equivalent to three million a year today. As a self-published author, Franklin controlled his own financial destiny.

Smashwords is an online mobile content publishing portal. The price is controlled by the author. Hocking sold her books for $2.99 to .99. At $2.99, she keeps 70%. At .99 cents, she keeps 30%. She uses Amazon’s Createspace for her physical book production.

Start with “The Fine Print of Self-Publishing” which explains contracts from three dozen or more major self-publishers. Download a presentation called “Why Self-Publish?” All contracts are not created equal. You might pay for the service – but end up not owning your own file. Lesson: Read the fine print.

I published my novel Stealing Thunder, a 700 page behemoth, my non-fiction book, Citizen Soldier Handbook: 101 Ways For Every American To Fight Terrorism, and my Parisian murder mystery, A Cold Death at Dog Ear Publishing. I have found them to be diligent and focused. They put all three books on Kindle. I created an ebook at Smashwords called, Citizen Soldier Handbook: Fighting Big Government, which can be downloaded to phones, computers, etc., with a free partial preview.

With ebooks soaring on the wings of iPads, Kindles, Nooks, and Android devices, I see two emerging ebook methods. One is mass ebook and the other is the DRM ebook. The choice depends on the subject matter and the audience.

The mass ebook is like an electronic mass paperback for Kindle, .mobi, epub, pdf, etc. That’s at Smashwords.com. Mass fiction, low priced, is particularly suited. A low cost entry point entices curious readers. A sale is a sale! A chief exponent of the low cost price point is J.A. Konrath. While the unprotected status of the e-book allows transfer from purchaser to a non-purchaser, Konrath maintains the financial impact is negligible. Konrath notes that writer John Locke publishes breezy adventure ebook novels for $.99. Locke sold over 350,000 downloads since January. Receiving thirty percent, he’s made about $100,000. Download Konrath’s thousand page manual called “The Newbies Guide to Self-publishing.” The price of “Stealing Thunder” is an insane $34.99 list due to its size. The Kindle version is $4.99. I converted the book to a trilogy for the Smashwords market. Digital authors must adapt!

The DRM ebook uses Digital Rights Management (DRM) technology which requires the purchases to buy a key and unlock the book. As with the mass ebook, you can designate some pages for free viewing – “Try Before You Buy” mechanism. I used DRM based windows technology called Desktop Author. The HTML based technology allows the integration of QuickTime videos, flash files, and links. This technology is really suited for highly specialized knowledge. Self-help gurus, tech manuals and Directories are perfect here. In “The Complete Guide to Self-Publishing,” gurus Tom and Marilyn Ross note that yearly updated directories can create substantial revenue from niche communities.

Both Smashwords ebooks and DRM ebooks have great features to generate sales. You can set up an Affiliate program so target websites can promote your work and make money. With social media like Facebook, Twitter, and others, you can cultivate and interact with your audience. I used Facebook for my “Citizen Soldier Handbook: 101 Ways For Every American To Fight Terrorism.” I got tons of hits and a multiple of sales.

The advantage is self-publishing is to keep your own voice and your own artistic expression. Chris Andersen, editor of “Wired,” wrote “The Long Tail: Why the Future of Business Is Selling Less of More” and “Free!”–essential reading for the entrepreneur author. Andersen spoke at the Directors Guild of America’s Digital Day, nothing that “authenticity” is the electricity between audiences and buyers. Major studios and publishing houses are real good at even faking “authenticity.” You see, film studios alter scripts to suit a broad audience, losing the material’s unique imprint. Publishing houses look for broad appeal – to pay their vast overhead. You have an edge. The self-published author is nimble, quick to shift strategies, and highly motivated.

Franklin Created His Own Internet

I read that Benjamin Franklin sold his articles to papers in other states. He created his own “net” of content and sales. Many articles fanned the flames of American Independence. So, without Franklin, perhaps, the fire of Revolution might’ve faded. He embraced the power of the written word so much that, in 1728, he composed his own mock epitaph. The word “Printer” was his only title.

Franklin practiced his self-composed Thirteen Virtues, written at age twenty, for the remainder of his life. “Industry. Lose no time; be always employ’d in something useful; cut off all unnecessary actions.”

Great words for Entrepreneur Authors. Why are you reading this? Get to work.