My Best Fourth of July Ever – Honoring a Veteran 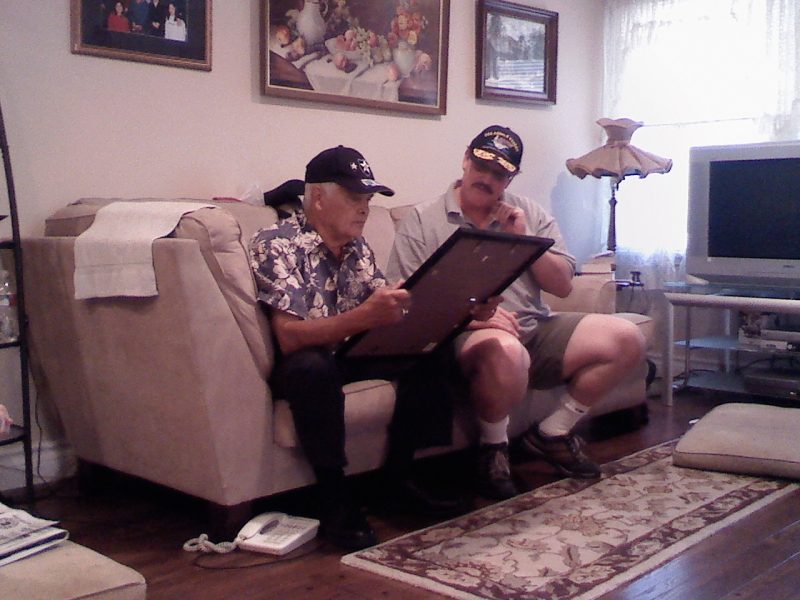 Our Heroes are everywhere. They pass by us at the market. They work for us. They walk our streets. I’m talking about the men and women of our Armed Forces who serve and have served our country ably, courageously and without acclaim. We all know one such individual. They don’t talk much about it, except with hesitation and humility. And they believe that their unbelievably difficult sacrifices have been forgotten.

And they live across from us. One such Hero is Adolph Arujo who served in the Korean war as a medic in the 2nd Infantry Division in the Punchbowl. This area had some of the fiercest fighting of the war such as Heartbreak Ridge.

We have never spoken in detail about the War nor will we. Courtesy of Hollywood movies, I can imagine the devastation of a friend’s horrible death at your side. I can imagine the onslaught of an attack and gut-bending fear that does not deter one from duty. I can imagine the alienation between a soldier and civilian life. But, of course, I’m still just imagining and not living this role. My words are wholly insufficient. Their valor, courage and service is far too incomprehensible in my experience.

I got to talking one day in general about the Korean War with Adolph, including marksmarnship, and then he said, “Nobody remembers and nobody cares.” He shrugged and we parted. That bothered me for a number of years and I had to take action. I wanted to get a letter, a declaration, anything from a Korean government official thanking him for his service. I called the Korean embassy but they didn’t understand. I tried to limp through conversation. I even wrote a letter. Nothing.

Flash forward five, six years. I am working on a film, “Body and Seoul” that is set in Korea. My producing partner, Robert Lennon, speaks Korean fluently, married a Korean woman and served in Korea. He is in Korea for two months to arrange talent, finance and locations. Over this time, he speaks to numerous officials, politicians and others in pursuit of our film project – and this letter. He is meticulous, unfailingly polite and determined. At last, he gets a former Minister of Defense, a Major General, Chairman of their Joint Chiefs of Staff, Deputy Commander of South Korean-US Combined Forces Command, etc., to write a letter thanking my Korean War-vet friend.

In part, the letter says, “On behalf of the Korean people and government, I would like to express my belated appreciation for your extraordinary courage, noble sacrifice and contribution to the war effort that you have show during times of war. We owe a debt of gratitude to you for your service in the Korean War and you will be remembered forever by the Korean people as our true friend, who protected our nation.”

Today, fifty-five years after the cessation of hostilities on the Peninsula, the Socialist Left-wing dictatorship of North Korea still threatens the Freedom and Liberty of the South Korean people. The recent missile and rocket launches, blustering rhetoric and refusal to discuss its nuclear proliferation make the border between North and South Korea one of the most dangerous areas in the world. The thirty-eight miles between the Demilitarized Zone (DMZ) and the South Korean capital of Seoul is sewn with defense mines, huge tank traps and other methods to block any massive North Korean attack.

I got the letter, and with a family, career and other obligations, I found months had gone by trying to find the right day and time to present it. And then suddenly the Fourth of July was coming. I hustled and put the letter in a frame, his other wartime photos and documents supplied covertly by his son.

I presented it to him on the Fourth of July, telling Adolph that as long as I am alive, that as long as my children are alive, that his sacrifice will never be forgotten for our Freedom and that of the South Korean people. Amazingly, my friend, Robert, and Adolph were both in the 2nd Infantry Division in Korea and share the same birthday. I do not believe that this is coincidence.

Freedom does not know time. The fight for Freedom comes full circle from generation to generation. My guess is that the experiences of Adolph in the Punchbowl are as real to him today as they were 55 years ago. But, hopefully, today and tonight, he and all our vets sleep a little better at night from the horrors of war. I believe that War is the second worst condition that humanity can experience.

“We owe a debt of gratitude to you for your service in the Korean War and you will be remembered forever by the Korean people as our true friend, who protected our nation.”

What did I get out of all this? The idea that we have to remember their sacrifices like they happened yesterday. For them, it still does. And the best Fourth of July. Ever.