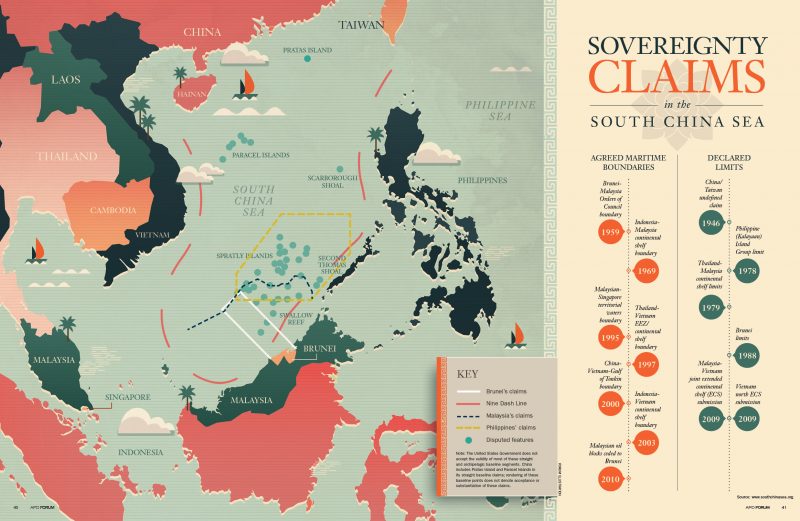 The Communist People’s Republic of China is confronting its neighbors and the United States in the Pacific. But how strong is their muscle in the fight? And, to paraphrase John McClane from “Die Hard”, what can we do to throw a ‘monkey in the works’?

First, China is an island. Isolated by Siberia, Western Muslim lands, the Himalayas and jungles of the south, China historically kept inside its borders. The Mongols were horse riders with a bloodthirsty wanderlust, but not Chinese. China’s punitive confrontations with India and Vietnam were short-lived. A population density map of China shows coastal regions where opportunity and commerce are strongest. The central and western hinterlands are almost unpopulated. A key weakness is the economic and social disparity of its interior and the coast. China’s future lies with the sea.

Second, China’s game is to control the sea lanes, its commerce and, therefore, its neighbor’s future economic survival. But control of the sea, by its very nature, requires naval forces and constant maneuvering. A quarter of the world’s oil on the sea passes from the strategic Straits of Malacca through the South China Sea to China and the West’s allies, South Korea and Japan. These ships head through the Spratly Islands claimed by China as well as Indonesia, Vietnam, the Philippines and Brunei. Asian nations are waking up to the threat of Chinese domination. Sea lanes are a double edged sword. Exports are China’s life blood. Its coastal cities prospering because of overseas companies. And this commerce creates conversation, dialogue and exchanges about the world outside China with the most developed economies – and Freedoms.

But more importantly, commerce trumps Communism, smashing this ideological crackpot scheme with the reality of jobs for survival and prosperity for a future. If the Communist party commands any loyalty, it’s for the ‘old boy commie network’ for business. For the people, the driving force is money. Shanghai became fabulously prosperous after the 1842 Treaty of Nanking opened the city to foreign trade. Would prosperous Chinese choose a destructive coastal war over continued prosperity? Unlikely unless the nationalist flame is so high that it blinds the populace to the memory of Second World War destruction. The people are already choosing money over Marx.

Third, China’s ‘capitalist’ economy is not a genuine market based system. China has artificially kept the yuan low relative to the dollar to keep their export machine at double digit growth. Cheap Chinese products create massive cash flow and thin profits. Capital doesn’t flow to the neediest and most worthwhile projects, but the ones promoted by the power brokers seated in Zhongnanhai, the Communist Party’s party pad in Beijing. As one banker noted

I still remember the first technical term that I learned as a junior loan officer. It was “zhan qi,” which in Chinese means “roll over.” … Loan quotas were decided early in the year by the planning department based on government guidance over which sectors and industries should be supported. Although no official data is available for state-owned banks during that period, it is widely estimated that the average nonperforming loan ratio was as high as about 30% to 35%.

The Communists are backed by the People’s Liberation Army which owns everything from bicycle factories to major hotels. An old Chinese saying, “To become rich, become a general.” The Chinese capitalist system is greased not by communism but by cliques from the communist party, their relatives and insiders. “…Chinese banks, despite a decade of reforms, remain more political than business entities. But Gary Liu, deputy director of Shanghai-based CEIBS Lujiazui International Finance Research Center, reports that “[Chinese bank] executives are not really managers, but government officials.”

The business plan counts less than the connections. This dynamic creates more bad loans than profitable companies. And is a weakness for the long-term survival of China’s dictators.

Fourth, China has a ticking time bomb between its economy and its demographics. China’s One Child Policy has created a disparity between male and females births, cracking Chinese society. The ratio of boys to girls in births is 1.17: 1.00 . Traditional insists upon a male heir so the abortion of females occurs at high rates. The result is more unmarried males which causes crime and social unrest. More men for fewer jobs. More anger. And a rise in the never-to-be-married males which is a crushing blow within Chinese society. And these unattached angry males are primarily in the concentrated littoral stretches of China’s eastern provinces. This tinderbox can be sated with jobs – created by those pesky freedom-loving overseas companies. Another delicate balancing act for the Communists between confrontation and their own survival.

Finally, I think that the English language itself is a potent weapon to fight the Chinese Communists. The Chinese people have tasted the Freedom of the West. It’s people have struck out against corrupt bureaucrats in bed with developers. Workers have defied the so-called People’s Party with strikes over conditions and pay. And dissidents use the Internet and texting to press for Freedoms. In old China, a family hoped for a sewing machine, a radio and a bicycle. Today, the same family wants a house, a car and a cell phone. With that cell phone, youths are suffering from “character amnesia.” They are losing their grasp of the difficult Chinese lettering system. This problem is growing so much that they’ve coined a phrase for it. “Tibiwangzi”, or “take pen, forget character.”

Perhaps the Chinese are just searching for the right English phrase. I can suggest one. “We The People…”